Who is John Norman?

The writer behind the John Norman pseudonym, Dr. John Frederick Lange, Jr., is an American, born in Chicago, Illinois on the third of June, 1931, son of John Frederick Lange and Almyra D. Taylor-Lange. He married Bernice L. Green on the fourteenth of January, 1956 and he has three children, two boys, John and David, and a girl, Jennifer.
He is now 83 years old.

At the age of twenty-two, in 1953, the author received a Bachelor of Arts from the University of Nebraska, four years later, in 1957, a Master of Arts from the University of Southern California and in 1963 a Ph.D. from Princeton University with a 149 page dissertation entitled In Defence of Ethical Naturalism: An Examination of Certain Aspects of the Naturalistic Fallacy, With Particular Attention to the Logic of an Open Question Argument".

He is an Associate Professor of Philosophy at Queens College of the City University of New York, in Flushing, New York, where he specializes in the areas of epistemology, logic, and innovational conceptualization. He has worked, at one time or another, either part-time or full-time, as a radio announcer and writer for KOLN, Lincoln, Nebraska; a film writer for the University of Nebraska; and a story analyst for Warner Brothers Motion Pictures, Inc., in Burbank, California.
He has also worked as a technical editor and special materials writer for Rocketdyne, a Division of North American Aviation, Inc., specializing in the production of rocket engines. 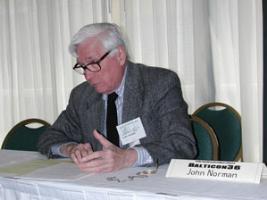 His first professional sale was a radio script to a station in Lincoln, Nebraska, when he was in high school, or somewhere thereabouts. Dr. Lange has published several scholarly works, including The Cognitivity Paradox: An Inquiry Concerning the Claims of Philosophy", The Philosophy of Historiography, Philosophy and the Challenge of the Future and Values and Imperatives
Under the pseudonym, John Norman, Dr. Lange has published a number of popular works, among which are the 33 Gorean books, three installments of the Telnarian Histories; The Chieftain, The Captain and The King; three other fiction works, Ghost Dance, Time Slave and The Totems of Abydos, a nonfiction paperback entitled Imaginative Sex, and a collection of short stories entitled Norman Invasions. He is a member of the Science Fiction Writers of America and the American Philosophical Association.
<thanks to Simon van Meygaarden & TCJN for this information>
Posted by Unknown at 15:22 No comments: