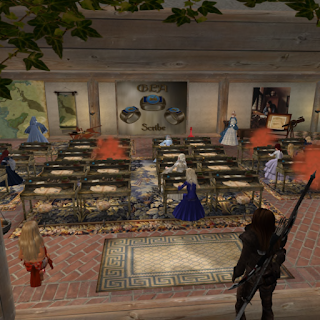 We salute the recent graduates of the GLA High Scribe Course. Lady Skylar, instructor for the course, began the ceremony with sage advice for the graduates. "You will come into your own as you serve. Most of all have fun in your position, be innovative and creative as High Scribe of your Caste."

During the ceremony, the graduates received their diplomas, the exclusive GLA High Scribe ring, and the seal of the High Scribe. 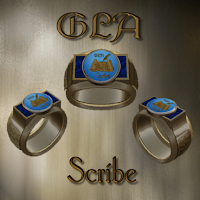 
If you are interested in higher education or pursuing the law of Gor, please consider these upcoming courses.

~ Eight, one hour classes and two pieces of written work. We cover issues such as the laws, sentencing, IC/OOC, court procedures, jurisdiction and day to day tasks. It is a friendly discursive style class. 8 week course.
~ next course begins June 15th
classes each Monday at: 2pm SLT

~ Eight,  one hour classes. Course is based around RP trials.  We focus on the law, courtroom procedure and tactics as we role-play a series of case studies. Two further cases are covered as written work.
~ next course begins June 16th
classes each Tuesday at: 2pm SLT


Ray Toxx dominated the board at Sunday's Zar Tournament Finals, sponsored by the Gorean Campus. Ironically, the win could also be considered a subtle expression of Ray's relationship with his opponent.

As Tournament Director, Astary Pendragon pointed out to spectators in his opening comments, the Final match pitted Master against his kajira. The humor of the situation was not lost on the fans or the players, as Ray entered the Finals with the disadvantage. His slave, Thaïs, needed only one game to take the trophy.

While Thaïs played an excellent game, Ray conquered her within the hour, bringing them to one final game of winner-take-all. After the players switched sides (with a few tender wishes for good luck between them), the final game began.

The gathered onlookers were silent during the 41-minute game, every eye on the board, until Ray claimed the win and Thaïs graciously conceded.

The Students Trophies and $1,000L went to Desire, Sendar and Alan.


The Gorean Campus congratulates Ray Toxx and all the winning players.
The Campus also sends special thanks to Tournament Director Astary Pendragon, the players and supporters for making the tournament a success.

A Beauty with Brains! Re-thinking the slave role


The Gorean Campus offers many classes for those new to Gor, but a recent addition to the schedule may bring seasoned role players back to the classroom.

Conceived, created, written and taught by MysticTopaz, the New to Gor (kajira basics) class goes far beyond traditional training. A girl may be able to serve every beverage in Gor and still miss the mark of what it takes to be a slave. Topaz's class explores what is lacking and teaches kajirae to enhance their service by using their brains.

"I'm not there to train slaves, but to train them how to think like slaves," she says. "It's the difference between, say, showing them how to serve and teaching them the thought process behind it."

"For example, many slaves check rims. Why? It's not in the books to do so. You don't check it against your skin because it might piss off a Master when you cut yourself, if it is flawed. Also, most Free have drinks in their own home. You, as a slave, should have checked it when you washed it."

She encourages all Free to attend the class, as well, despite its focus on kajirae. While it's important for a slave to understand the thinking behind their role, it's equally important for the Free to know when they are pushing a slave out of the Gorean culture with non-Gorean demands.

Topaz elaborates. "Bazi tea is in the books. It's three cups, but it's not the formal ceremony like a Japanese tea serve that some Free order."

Though relatively new to Second Life, Topaz's experience in Gorean role play spans many years and several text outlets. Her in-depth knowledge of the Gor novels, perceptive logic, and gregarious charm combine to make New to Gor (kajira basics) an engaging and informative class. Future topics include common foods, behavior and manners, sex, and slave attire--with a twist! Be prepared to learn something new!

All Goreans (Free and slave) are welcome to attend MysticTopaz's New to Gor (kajira basics) class on Fridays at 9am SLT.
Posted by Abbie Adams at 01:43 No comments:

The Woodsman: An Interview with Quercus Robur 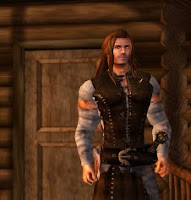 Beyond the wealth of the cities, within a clearing in a dense forest on the Isle of Tarns, the woodsman Quercus Robur sits beside a small campfire. He appears content and comfortable in the surroundings, but there's a sense of restrained energy which emanates from him. He is not a man who is accustomed to sitting still.

To the visitor, this lower caste woodsman offers none of the formal hospitality one might expect from a higher caste Gorean. Being allowed into his forest should serve as welcome enough. There is no contract that secures his right to the land, nor any ego attached to his attitude. His feelings of ownership stem from an ingrained sense of duty. This forest shelters him and provides his livelihood. In return, it falls under his protection and that's an obligation he takes quite seriously.

It's tempting to consider him a simple man, but a more apt description would be "uncomplicated". Sincere and unpretentious, Quercus exudes a refreshing combination of confidence and humility. He's comfortable in his own skin and his love of the forest emerges as a robust symbiotic relationship. He needs the forest and the forest needs him.

Although he is a member of a lower caste, Quercus' honor is as fierce as a warrior's and his integrity could rival any scribe. He is deeply proud of his caste and his work, as any true Gorean man would be. 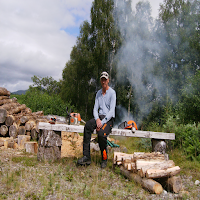 My OOC interview with the typist/creator of Quercus Robur began with his offer to include real life photos. I hesitated to accept in order to protect his privacy, but he assured me that he had nothing to hide. It's an unusual response in SL, as the majority of role players choose (often with good reason) to remain anonymous. Yet, I'm not surprised at his candor.  That ingenuousness is exactly what makes Quercus Robur such a compelling role play character. The typist brings the best of himself into the character and mingles it with his extensive knowledge of Gor. It's advice he gives to all role players. "Do your research. Warriors; learn your codes and aphorisms. Woodsman; know your trees and their uses. Scribes; learn the laws. Merchants; learn how to negotiate."

It's good advice, but how should a player learn the codes of castes not detailed in the books? For Quercus, the answer came in using his real life experience as a woodsman. He quotes from a poem he wrote:


The Woodsman's heart is in his trees
For the giants of the forest do him please.
And before he swings his axe to fell,
His love for that tree he will tell.
He tells the tree of the seeds he took,
Of how it will be entered in  his record book.
And reminds the tree, that in good time,
The seeds and saplings shall continue its line.


He explains, "In RL, if I fell a healthy tree, I do that. It stands to reason a Gorean would. Gor is the counter Earth, so there has to be similarities."

When asked about his upcoming classes at the Gorean Campus on the Caste of Woodsmen, he points out the truth of SL Gor role play, "There is much glamour in the high castes, but it is the low castes that keep Gor ticking." His purpose in teaching the class is to promote the lower castes and encourage more players to take on those roles. "I train apprentices at work in RL. I would like something like that for Gorean Woodsmen." Quercus is willing to take on apprentices, but he is careful to outline the demands of such role play. "It would be harsh. They need to understand it would not be abuse, but character building."

Indeed, character building is foremost in this creator's mind and his attention to detail is impressive. Even his character's name was considered and carefully chosen-Quercus being the Latin word for a European Oak. The typist is also careful to remember that a Gorean woodsman would not be highly educated or cultured. While some players might find that restrictive, Quercus' creator uses these traits to his advantage. Since the character of Quercus is naive when it comes to innuendo, he doesn't understand why slaves and Free Women giggle as he describes the benefits of his "hard wood." It makes for riotous and outrageously funny RP that other players are eager to join.


Quercus: My RP is fast and furious.
Abbie: It must be hard to keep up with you.
Quercus: Yeah, many a slave and FW have said that.

In addition to his quick wit and adept role playing, Quercus is an award-winning poet. His poems speak from the heart of a Gorean woodsman, yet shine with the wisdom of the RL man. He has won the coveted Olni Golden Quill three times. An experienced performer, he uses both comedy and poetry to entertain in SL. He'll be doing a Poetry and Comedy show at the Gorean Campus on May 24th at 4pm SLT that is highly acclaimed and should not be missed.

Quercus Robur will be teaching a series of classes on The Caste of Woodsmen at The Gorean Campus beginning May 10, 2015 at 4pm SLT. All Free and slaves are encouraged to attend.
Posted by Abbie Adams at 16:24 No comments: 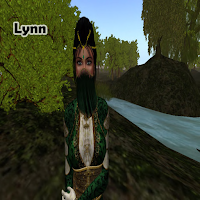 The Gorean Campus is proud to announce the opening of a top quality, BtB Medical Facility for any Gorean Free or slave who requires medical treatment or exams.

Under the direction of Chief Physician Lynn Ohara, and staffed with eight highly skilled physicians and apprentices, we are open daily to serve the needs of the Gorean community.

Walk-in or make an appointment to receive fast, convenient and professional medical services.